This article was originally published on CBC News.

Montreal gamers and interested amateurs are congregating at Concordia University this week for Arcade 11, a three-day DIY arcade

Pippin Barr, the event’s curator, said the aim is to show the public “a side of games they might not normally encounter.”

“There’s this whole other side of games made by very small groups of people, independent people, who aren’t necessarily trying to make huge money, so they make more experimental and stranger games,” said Barr a scholar in residence at Concordia’s department of design and computation arts.

The event is hosted by the Technoculture, Art and Games research centre.

It runs from Wednesday to Friday from 11 a.m. to 5 p.m., and features a multitude of experimental video and board games the general public has probably never heard of, including an electronic craft room.

Arcade 11 features a multitude of experimental video and board games the general public has probably never heard of, including an electronic craft room. (TAG Research Centre)

The three-day event will feature game developers, internet streamers and game scholars, according to the TAG research centre website.

Barr said that, in choosing the games, organizers steered away from violent or mainstream games. None of them include guns or shooting.

“There’s a real focus on experimenting with video games as a medium and seeing what different sorts of things we can do, rather than chasing more traditional or conventional games,” Barr said.

“There’s a lot of experimentation,” he said. “We’re trying to bring playfulness back into video games.” 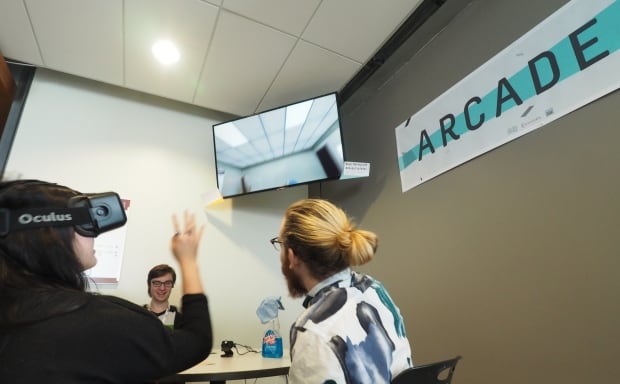 He was also interested in curating games from around the world, not just from North America — Arcade 11 feature games from Australia, Poland, South Africa and Holland.

The event is taking place in the EV building at Concordia, 1515 Ste. Catherine Street West, on the 11th floor. Entry is free.

VR art through the lenses of Luiza Helena Guimarães